A thread by Aabhas Maldahiyar 🇮🇳

n #SadarPranam @Javedakhtarjadu ji. I don’t think my MP @Tejasvi_Surya needs to worry about Huns or Vikings but surely by likes of Akbar. I explain how, in this thread.

U may respond should you have enough substance.Javed Akhtar✔@JavedakhtarjaduReplying to @vivekagnihotri

Don’t you know that Akbar and many of us are from the same school and the same class . Our relations got spoiled only when his great grand son became like today’s Right wingers Any way , I have promised to your frighten MP that we will save him from Attila the Hun n the Vikings6010:52 PM – Feb 6, 2020Twitter Ads info and privacy342 people are talking about thisn So Why Akbar isn’t desired?

n Irfan Habib mentions about forced productions by various including Asaf Khan for their own financial benefits.

n Habib further gives account of money hoarding at large scale by Mughal Emperors including Akbar in the same book.

He quotes De Laet who mentions Akbar’s treasure to be ~522.4 million florins & Sarista Khan to have hoarded ₹380 million.

n So @Javedakhtarjadu Akbar was booming our economy by hoarding & extortion? 🤔

This is further substantiated by fact that India’s per capita GDP went in negative under Akbar the Great. Which means he kept becoming richer though making Indians poor.

n Reason 2, for which @Tejasvi_Surya & us must worry likes of Akbar was his tyranny & bigotry. I explain below👇🏼

In early years of his reign,Akbar suppressed Muslim sects that were condemned by the orthodoxy as heretical.

n On the advice of Shaikh Abdu’n Nabi, he ordered the exhumation of Mir Murtaza Sharifi Shirazi: a Shia buried in Delhi for the grave’s proximity to that of Amir Khusrau.

His argument was as below👇🏼

n “A “heretic” could not be buried so close to the grave of a Sunni saint, reflecting a restrictive attitude towards the Shia, which continued to persist until the early 1570s.

Such was Akbar’s hostility towards Shi’as. n Akbar even suppressed Mahdavism in 1573 during his campaign in Gujarat. Mahdavi leader Bandagi Miyan Sheik Mustafa was arrested and brought in chains to the court for debate and released after eighteen months.

Source for 6/n-9/n:’Akbar and His India’ by Irfan Habib

n In 1578, the Mughal Emperor Akbar famously referred to himself as:
“Emperor of Islam, Emir of the Faithful, Shadow of God on earth, Abul Fath Jalal-ud-din Muhammad Akbar Badshah Ghazi , is a most just, most wise, and a most God-fearing ruler.”

@Javedakhtarjadu I’m sure you know what Ghazi means.

Till then you may arrange answers upto 10/n. n @Javedakhtarjadu now let’s talk abt persecution of Hindus by Akbar.

1)Massacre of Hindus of Garha in 1560 AD(Ref: The SAGE Encyclopedia of War: Social Science Perspectives
edited by Paul Joseph)

Abul Fazl states: 48,000 Hindus were persecuted at the orders of Akbar.

n One may argue that soldiers always get killed in war, hence 8000 Rajput Warriors. 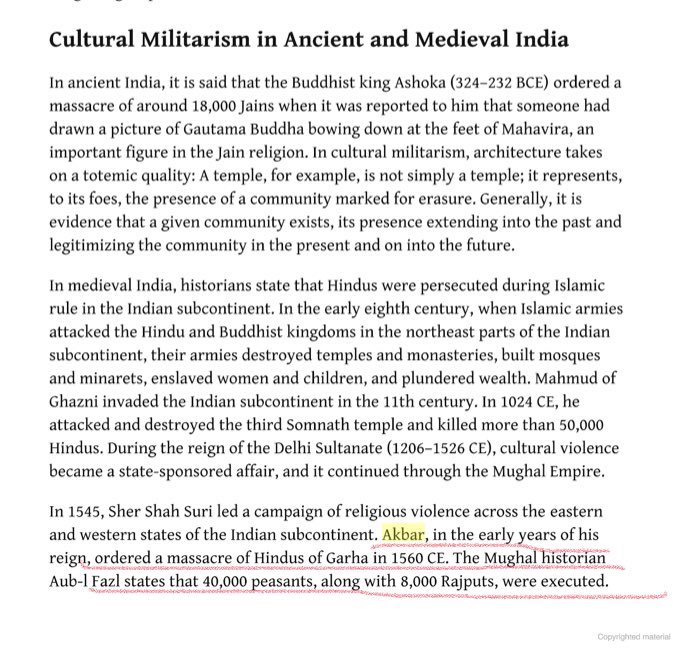 But @Javedakhtarjadu why Akbar killed 40,000 peasants?

Just because they were Kafirs. Akbar was a Jihadi. Read more. 👇🏼 n 2)Massacre of Gondwana

In 1564, Akbar conquered the Gondwana kingdom. The territory was ruled over by Raja Vir Narayan, a minor, and his mother, Durgavati, a Rajput warrior queen of the Gonds. nDurgavati committed suicide after her defeat at the Battle of Damoh,while Raja Vir was slain at the Fall of Chauragarh,the mountain fortress of the Gonds.The Mughals seized immense wealth & 1000 elephants.Kamala Devi,a younger sister of Durgavati,was sent to the Mughal harem.

If Akbar was man of morality why did he send Kamlavati to Harem?

n The fortress of Bhun,which is an idol temple of Mahámáí,was taken by Muslim assailants. A party of Rajputs, who had resolved to die, fought till they were all cut down.

A nos of Brahmins,who for many years had served the temple,never gave 1 thought to flight, & were killed. n Nearly 200 black cows belonging to the Hindus, during the struggle, had crowded together for shelter in the temple.

Alas, @Javedakhtarjadu Some savage Turks, while the arrows and bullets were falling like rain, killed these cows one by one. 😓 n They then took off their boots and filled them with the blood, and cast it upon the roof and walls of the temple.

Shame on the Akbar’s Army. @Javedakhtarjadu don’t u feel like spitting on Akbar? Reference for 17/n to 20/n:

Elliot, Henry Miers; Dowson, John (1873). The History of India, as Told by Its Own Historians: The Muhammadan Period. Vol. V. London: Trübner and Co. n @Javedakhtarjadu how can we forget the third siege of Chittor? Many temples were destroyed. The shrine of Moinuddin Chishti in Ajmer was presented brass candlesticks by Akbar which were taken after the destruction of Kalika temple during this siege.

Bigot! Wasn’t he? n September 1567, Akbar left for Chittor, and on 20 October 1567, camped in the vast plains outside the fort. In the meantime, Rana Udai Singh, on the advice of his council of advisors, decided to go away from Chittor to the hills of Gogunda with his family. n Jaimal and Patta were left behind to defend the fort along with 8,000 Rajput warriors and 1,000 musketeers under their command. Akbar laid siege to the fortress, which lasted for 4 months. n On 22 February 1568, Jauhar was committed in the houses of Patta, Aissar Das & Sahib Khan. Next day the gates of the fort were opened and Rajput soldiers rushed out to fight the enemies. In the ensuing battle, 8,000 Rajputs were killed alongside 30000 peasants.

n According to James Tod, 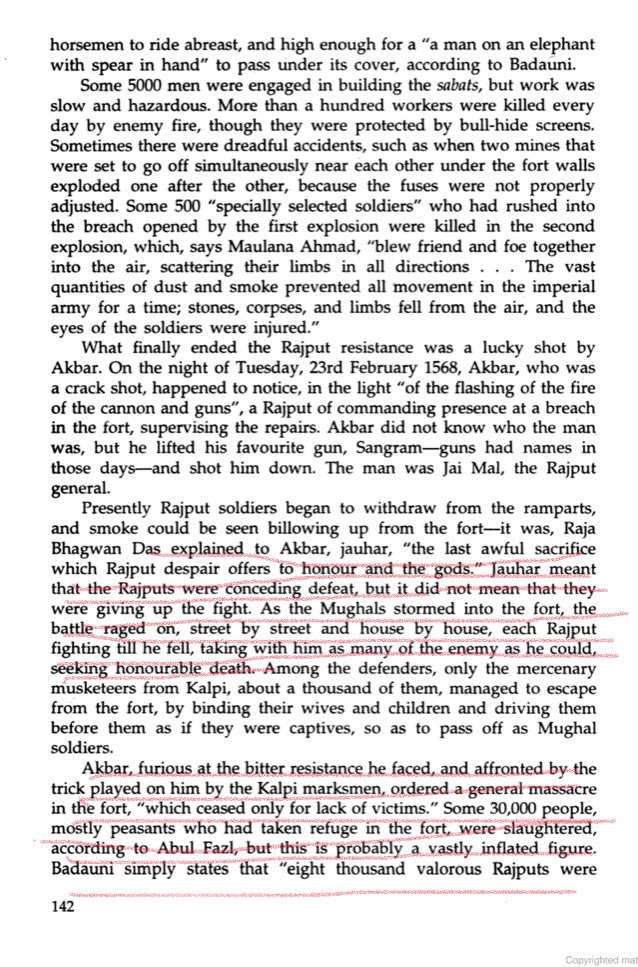 had the Janeu of slain collected & weighed for estimate of killed. It weighed around 200kg.

@Javedakhtarjadu can u imagine mercilessness of Akbar?

n Reference for 22/n to 26/n: Emperors of the Peacock Throne: The Saga of the Great Mughals
By Abraham Eraly n @Javedakhtarjadu ji, Jesuit Father Monserrate, Aquaviva and Enrique arrived at Akbar’s court in early 1580 and Monserrate recording his journey in a travelogue comments that religious zeal of Mussalmans has destroyed many Hindu temples.

n and to add 28/n.. in place of temples countless tombs and shrines of mussalmans have been erected in which these men are worshipped as if they were saints.

👆🏼 In the reign of great Akbar. n Akbar had rewarded Abd al-Qadir Badauni with gold coins who soak his Islamic beard in Hindu infidel blood.

The gesture of Badauni had delighted “Akbar the great Secularist”
Source: The Legacy of Jihad:Islamic Holy War & the Fate of Non-Muslims edited by Andrew G. Bostom

2 thoughts on “Why Akbar was not desirable”